An independent guide to Val Thorens

On this page, you can find notes on Lac du Lou off piste itineraries.

There are two main routes down to the lake - starting from the Cime de Caron, or from the top of the Boismint chair. There's also an itinerary from the top of La Masse, in Les Menuires.

Read about the Lac du Lou off piste itineraries here.

Don't forget to read our off piste safety page.

The annotated image above is of the Lac du Lou seen from the Les Menuires ski area. It shows the lake, and two of the starting points for itineraries to it - the Cime de Caron, and la Pointe de la Masse.

Take the Cime de Caron cable car to the top. (They won't let you get off half way anyway ;-)).

There are two main ways into the itinerary. Head towards the black run, Combe de Rosael, and where the piste plunges down to the left, towards the Maurienne side, leave it, and go to the right of the ridge, into the Vallon du Lou. A yellow sign here alerts you to the fact that you're going off piste.

Or, follow the red run, Col de l'Audzin, and just before the steep, narrow section of the piste, leave it and go left.

There are then a few alternatives, and quite a wide expanse of slopes to ski or board. Unless it has snowed recently, the main route will be well-tracked. It can be an advantage to ski on compacted snow, if the other areas are crust.

After the initial slopes, you arrive at the stream (le ruisseau du Revers), and follow it along a flat section.

Then traverse round to the right, above the lake, to avoid having to walk across it. There's a higher and a lower route. (If there's a risk of avalanche, though, it may not be advisable to traverse those slopes). You arrive at the frozen lake, the Lac du Lou. Looking back up into the Vallon du Lou, you can see the Mont du Chat (pictured below - see the cat's ears).

There's a wooden bridge where a stream (le torrent du Lou) runs out of the lake, which makes a good place for a stop. A pisted track takes you to the Plan de l'Eau chair, and the return to Val Thorens.

Note: although this is relatively easy, and a well-skied route, it is still off piste, so not covered by the ski patrol. Therefore, all the safety considerations apply. 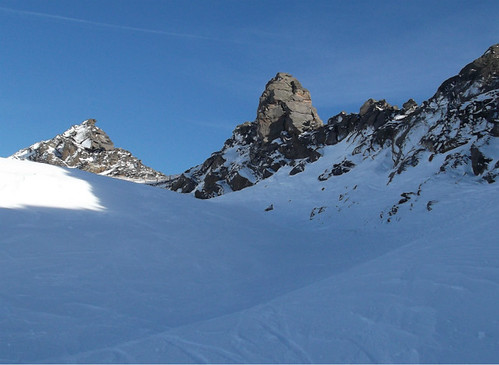 This is a shorter alternative route, that also ends up at the Lac du Lou.

From the top of the Boismint chair, ski a short way down the track, then go up a little slope to your left, and over into the Vallon du Lou.

The slopes are steeper than from the Caron, with no flat sections, so some boarders prefer this option. These slopes can be more prone to avalanches, though, and it is not as easy to stay away from risky pitches as it is when starting from the Caron.

The slopes face west, and can be good in the afternoon in late season when the spring snow warms up in the sunshine. As with the descent from Caron, you arrive at the wooden bridge over the Lac du Lou, at the end of the lake where a patch is often ice-free.

In the spring, the edge of the lake begins to melt, and you can waterski across it:

New in winter 2017-18, a 31-bed Lac du Lou refuge has been builtnext to the existing one, in order to bring more people into this beautiful valley. It will cost €1.2 million, have 35 beds, and be staffed by a guardian in the summer and winter seasons. It should open in December 2016.

Our suggestion for quality ski and snowboard hire at fair prices - Zenith ski shop, in the centre of resort.

All the ski shops in Val Thorens, with a location map.

A guide to all the ski schools in Val Thorens, including the ESF, Prosneige, Ski Cool, Evolution 2, and Free School Attitude.

Whether you're anticipating a trip to Val Thorens, or already in resort, you'll want to know the weather forecast, see the snow report, and look at the webcams. We have it all covered.

The mountain restaurants of Val Thorens - the best places for a coffee or hot chocolate, and the most attractive lunch options.